As I understand it, the variation in the speed of time as proposed in the Special Theory of Relativity has been verified with the use of supersonic jets and clocks in space and so on. However, a similar and yet vastly cheaper piece of evidence is the fact that it is now October. Yes, October, meaning supermarkets everywhere are already lining the shelves with products full of Christmas cheer and all that hoopla.
I know for a fact that as a young child (and even not so young young adult) the year took some time to elapse. There were the summer holidays, the endless tedium of school, time spent riding around and down to the beach, more holidays, books to read, birthdays to look forward to, and the eternally distant glimmer of another Christmas waiting somewhere in an excruciatingly unreachable future. All of which took time, and lots of it.
Now, one Christmas rolls into another with the blink of an eye. I guess as age sets in one moves more slowly, and thus time moves more quickly. Something like that anyway.
So I now, shockingly, have a list of dates for stalls I will be having at the Old Bus Depot Markets in Canberra in the rapidly shrinking period of time before 2011 slaps us in the face.

I'm tired just thinking about it. On the more enjoyable side of sped-up-time, it is now Spring here, meaning longer days, warmer temperatures, and a wonderful array of flowers blossoming. Here is a photo of the view from my workbench at the moment, full of flowering crabapple trees, native mint, azaleas, camellias, weeping cherries and a host of bulbs and other assorted flowers. 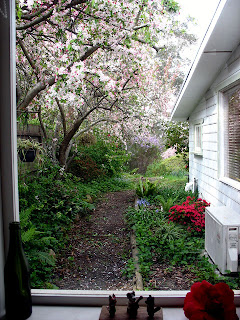