After many years of wistfully planning on making a sourdough starter I began one a few weeks ago, based on a recipe in a cookbook called The Modern Vegetarian Kitchen by Peter Berley. The starter is based on organic grapes, which provide yeasts and sugars and whatnot, which for some reason struck a chord with me, and no other recipe was ever going to be able to take its place. However, the usual distractions meant I never quite got around to it, or thought of it when grapes were not in season, so the years went on and I got by making yeasted bread or buying my sourdough. Fortunately there is a fabulous local sourdough bakery called Hominy Bakery in Katoomba to keep me happy.
Anyway, I managed to remember the recipe this year just as organic grapes appeared in the Blue Mountains Food Co-op, so I was finally able to get the thing going. Unfortunately the process is kind of long, and I hadn't considered that we were going on holiday. As it happened, the holiday came up before the starter was finished its growing phase, so it came on holiday too. I guess it probably would have come anyway, since you have to feed this new creature to keep it happy. Kind of like a primeval Tamagotchi... which I guess is pretty ancient now itself. Maybe a Nintendog? In any case Anna thought it a little disturbing that my little yeast monster was travelling around with us, getting the royal treatment to ensure it was well-fed and not too hot or too irritated.
The holiday was very nice, although the weather was a little wet... Our annual pilgrimage to the beach was for much of the time grey and drizzly. Still, a beautiful spot. 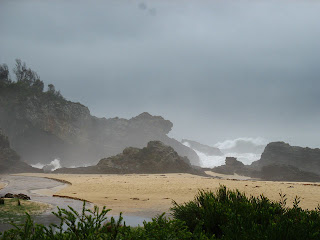 During our stay there (Mystery Bay on the south coast of NSW) the starter grew out of infancy, but I didn't have the requisite utensils or ingredients (or the recipe book) to make my first loaf, so I had to wait until I came home. However, it was lovely and bubbly and smelt sourly pleasing. 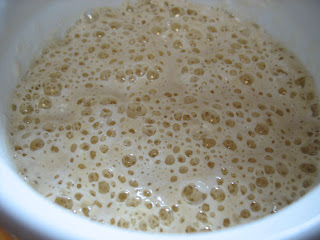 It turns out that the recipe for the bread takes a heck of a long time to make too, just like the starter, so even though I began the process yesterday I have only this afternoon got to take a bite. It's good! Although a bit flatter than I expected. The dough was insanely wet from following the recipe, more like a cake batter than any bread dough I've ever made. I added cup after cup of flour in defiance of strict instructions from Mr Berley not to. 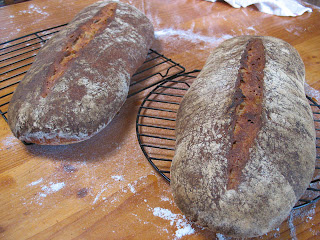 So, I guess I should have been busy making jewellery but there you go. I went on holiday, grew a yeast monster and made a couple of loaves of bread instead.
I did make a piece for a long-suffering customer who commissioned it back in our last couple of weeks at Glebe. He saw one of my pendants based on the Musicians of Bremen folk tale, and having a personal connection with Bremen was enthusiastic about it.. but thought maybe a slightly different design would be better. Our trip and bread and a plumbing overhaul kind of held things up, but I finished it today. 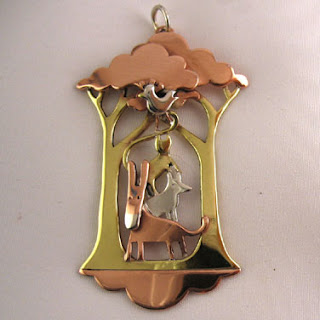 I guess if it isn't quite right for this customer it may turn up in my Etsy shop...
On the market front, I was hoping to book in to the National Folk Festival in Canberra, coming up in April. Unfortunately I just checked the site and applications for stalls ended back in January... So, maybe next year.
Posted by David at 5:12 PM