Well, another Christmas down, and almost another year. Many thanks to the very generous patrons of the Old Bus Depot Market in Canberra who made it a very busy and enjoyable end to 2010!
In my efforts to produce a lot of jewellery in a short time frame, I frequently found myself staring at the walls trying to come up with designs. Doodling ideas is my usual method of coming up with something, but in most instances I have a kernel of a concept to get me going, even if it's something as basic as the shape being circular or square or whatever. Much of the time during this period of production, the kernel started with the idea that it would be a piece with an animal in it, and as the animal closest to my heart is my little cat, it frequently turned out that the theme would be centred on a cat. Fishing cats, flying cats, swimming cats, cats in space - you get the idea. I think I counted that about 20% of all the new pieces had a cat somewhere in them. So when I struck on the idea of a "Cat Fight", it seemed incredible to me that I had never used that common expression as a basis for a pendant before. In the instant that the phrase came into my mind, the layout and metal composition of the piece was clear to me, and although the little rapiers turned out to be reasonably tricky to create, I was very happy with the result. I sold the piece on the last market of the year to a very nice woman buying it as a gift for a friend, and as I no longer have it to post on Etsy, I figured I'd give it a moment in the Sun (well, in this dark, remote corner of the cosmos anyway). 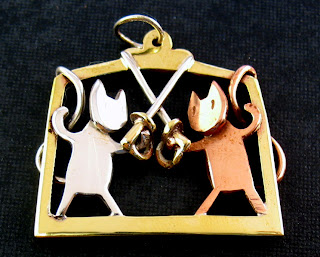 I'll restrain myself from uploading any more cat themed pieces (at least at the moment), or photos of the cat which inspired them, but I have to indulge myself in adding a photo of a cake which Anthea, Anna's mother, gave to us for Christmas. Although it was a beautiful, sunny, hot day here, the little decorative scene atop the cake of our cat playing in the snow on a white Christmas seemed strangely appropriate. I guess even though every Christmas I've ever lived through has been in summer, I've still been conditioned to think of it as a winter event. Personally I blame the Miser Brothers, and all those Rankin/Bass animated Christmas specials that I grew up with and still have a strange affection for. 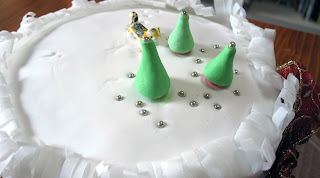 So, a new year approaches, and I am planning on another market at the Old Bus Depot on January 16th.
Posted by David at 1:30 PM