Last week (or thereabouts) we had another stall at the Jewel of Canberra Day at the Old Bus Depot Markets, where I had the largest amount of stock I think I've ever been able to display at a market. It may not look like that big a deal, but after all the hours of my life that went into making them I had to take a photo of the collection. 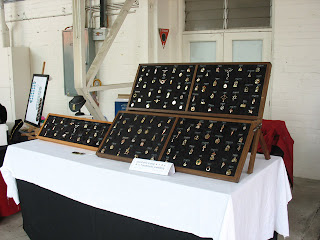 We had a great day, and the stall was much emptier by the end of it. Now I have the challenge of getting more stock made in a few short weeks to be ready for the next market.
Actually, it's really the plural, markets, because the dates for December are Saturday 11th, Sunday 12th and then again Saturday 18th. Gosh! Not much time for making between drinks! But I'm busy, busy, busy at the moment anyway, and have already made a bunch of new pieces in the last week, with more to come (hopefully) before December 11th slaps me in the face.
Apart from the market stuff, I'm finally off my crutches! Hooray! Now I'm walking about free as a bird, even if I do look pretty weird, probably like someone who really should be on crutches.
Posted by David at 9:31 PM