What to do with moola

Having bid farewell to 2011, it is now time to say adieu to the Rabbit for another 12 years and to welcome in the mighty Dragon. Yes, Chinese New Year is on us again, and it is once again time to overindulge on food and drink and to hope that someone will hand over a little red envelope with some moola inside. The hard currency sort of moola, not, as I have just learned through the power of Wikipedia, the vegetable sort of moola which as it happens will not, in our house, be stuffed in red envelopes but grated, boiled, mixed with rice flour, tapioca starch, soy beans, shitake mushrooms and shallots, steamed and then fried and served as luo bo gao. Who would have thought a daikon radish could taste so good? And who would have thought it was called moola in Bangladesh? 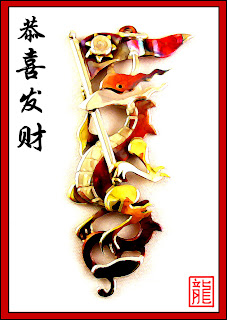 OK, so another year on both the Gregorian and Lunar calendars means a return to work, and as I was out cycling today, thinking I was happily removed temporarily from civilization, I received a phone call from the Old Bus Depot Market asking if I was going to be attending the January market. I guess it was my fault for smuggling such a piece of technology with me out into the bush. In any case it was a reminder that it was time to get back into things, and having provided an affirmative response to the enquiry I had to turn around and get back to my studio. So another stall looms, this one on Sunday 29th January, the Year of the Dragon. As is traditional for me, I won't be at any market in February, so the following market should be in March, and when I dig out the date for it I'll post it somewhere close to here.
Posted by David at 10:24 PM