No monkeys in the Savage Land

After all the recent work on our house, I was very happy to take the opportunity to head out into the bush for a couple of days with my friend and neighbour. Michael has some land down near the , and we walked there a couple of years ago over the course of a week, detailed in another neglected blog-of-sorts. Anyway, we thought a trip out there to check on the land and collect some firewood could be combined with a walk to , which is located in a fairly remote section of the . Michael had heard about some hot springs on the mountain, which although highly unlikely to exist nevertheless seemed extremely compelling. 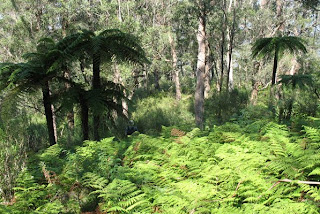 I’ve just entered details of the walk in that other blog mentioned above, but it might be worth mentioning here that I may have found out an interesting fact that I omitted from that text. The  almost certainly exists, but not in Antarctica, and it doesn’t have or monkeys bathing in them. Almost at the top of the mountain (ok, only 1047m above sea level, but high enough for this story) there was a dense cluster of tree ferns, partly in a little gully and partly across the exposed face of the mountainside (only a small number are seen in the photo, I wasn't getting all worked up about just a handful of them).  Usually I wouldn’t have expected to see such fragile plants in such a dry and exposed position, and I was on the lookout for some of the Brotherhood of Evil Mutants lurking about, or possibly Ka-Zar or Sauron (not the Dark Lord, but the ridiculous pterodactyl guy). We searched about briefly, but couldn’t find any , and thus also couldn’t get a glimpse of any bathing monkeys. Really, the should have , complete with monkeys, so whether we just missed them, or whether they were destroyed by Magneto, or whether it was not in fact the , are all questions which may forever remain unanswered.
I did also make some jewellery in the past week, but have already posted them to Etsy, and so won't bother revisiting them here. Anna also bought me the new Markets and Fairs magazine, so I'm running out of excuses for not organising new markets. Something is sure to happen soon!
Posted by David at 10:33 AM