OK, so I figure that this blog is a bit like my new sourdough starter: it's easy to forget, and if it doesn't get fed occasionally it starts to smell a bit funky. Not disco funky, but more like curdled milk.
So, here I am feeding the beast. I would like to say I have got some market news, but I haven't. I have actually made some jewellery, though, which was rather nice given that I haven't had much time to dedicate to it. But I'm still frequently obliged to work on our house, which seems to have consumed my life. Now it's the roof... which has been a bit suspicious for a while, and turns out it needs to essentially be rebuilt over half the house. The other half probably wouldn't mind either, but we're ignoring that at the moment. Today was spent replacing the old, very insufficient rafters with new, hefty ones, but of course it involved lots more than I expected and will continue to do so for the next week or so.
Anyway, in order to show that I do actually hope to make more jewellery in a dedicated sort of way again in the future, here are some pictures of the studio which we built last year. It's a bit messy... but then it always is in my section at least. 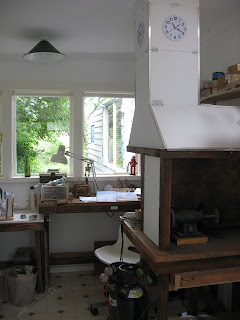 I designed this area to be compact but useful, so most things are accessible from my little swivelling student's chair, except for the polishing area on the right. The soldering bench is behind that, seen below, and they share a flue, which looked so much like a clock tower when I had made it that I had to add clocks on its faces. Out of the window is the wall I just had to re-clad, having removed it to replace our plumbing. I still haven't finished it... 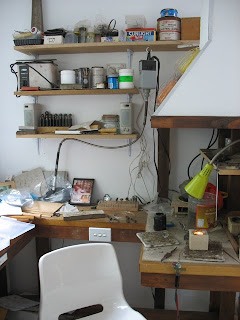 So, there's the soldering area on the right, and the drilling and hammering in the centre. 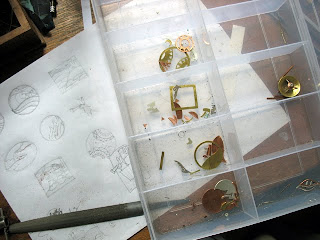 And here's a close-up of the main bench under the window, where I do the endless sawing and filing. I usually have a sheet like this with a bunch of designs, and I tend to cut out a whole load all together, then do the soldering and polishing. These pieces all got finished last week, some are on etsy, and one is on its way to a customer in the USA.
So, hopefully the beast will sleep in funkless peace again for a little while...
Posted by David at 8:47 PM